Why Republicans Embrace Simpletons and How It Hurts America

With nearly two million Iraqis displaced, tens of thousands dead and more than 4,500 US soldiers killed, the overall result of the war on Iraq may not be what the US bargained for.Al Jazeera's Patty Culhane has been looking back at the promises and predictions that were made by Washington nine years ago.

Source
Posted by Stacey at 2:49 PM No comments: 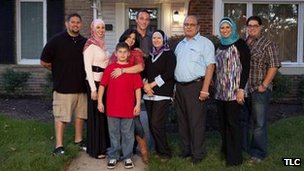 Home improvement retailer Lowe's is facing criticism after removing advertising from a reality TV show showcasing American Muslims.
The company pulled ads from All-American Muslim after complaints from the Florida Family Association.
The cable TV show portrays the lives of five families in Dearborn, Michigan, a city known for its Muslim and Arab population.
Lowe's issued an apology, but did not say it would re-advertise on the show.
The North Carolina-based company said in a statement it apologised for having "managed to make some people very unhappy".
"It appears that we managed to step into a hotly contested debate with strong views from virtually every angle and perspective," the firm said.
"As a result we did pull our advertising on this program. We believe it is best to respectfully defer to communities, individuals and groups to discuss and consider such issues of importance."
In a statement on its website, the Florida Family Association called All-American Muslim "propaganda that riskily hides the Islamic agenda's clear and present danger to American liberties and traditional values".
The association asked members to send emails to companies that ran advertisements during the show.
According to the association, adverts from many other firms are no longer appearing during the programme. However, while many firms buy adverts to run at any time, Lowe's said it pulled adverts bought specifically for broadcast during All-American Muslim.
Continue reading the main story

Suehaila AmenAll-American Muslim participant
The Learning Channel, which broadcasts the programme, features several reality shows focusing on the everyday lives of subjects viewed by many as controversial or outside the mainstream.
They include a polygamist family in Sister Wives, and the Duggars, a conservative Christian family with 19 children on 19 and Counting.
The channel describes All-American Muslim as "a powerful series that goes inside the rarely-seen world of American Muslims to uncover a unique community struggling to balance faith and nationality in a post 9/11 world".
'Extreme disappointment'
Keith Ellison, one of only two Muslim congressmen, said withdrawing the advertisements was "disappointing".
"The success of All-American Muslim shows how ready the country is to learn about Muslims as Americans," he said in a statement.
"This probably makes hate-mongers uncomfortable - as they should be," Mr Ellison, a Democrat who site in the House of Representatives for a Minnesota district.
Mr Ellison was among those who signed a petition calling on Lowe's and other advertisers to resist calls to step aside from opponents of the show.
Suehaila Amen, whose family is featured on All-American Muslim, told the Detroit News on Sunday she was disappointed by the retailer's decision.
"I'm saddened that any place of business would succumb to bigots and people trying to perpetuate their negative views on an entire community," she said.
Ted Lieu, a Democratic state senator from California, said he was considering calling for a boycott of Lowe's, a pledge already made by Twitter users using the hashtag #boycottlowes.
"The show is about what it's like to be a Muslim in America, and it touches on the discrimination they sometimes face. And that kind of discrimination is exactly what's happening here with Lowe's," Mr Lieu said.
The Michigan director of the Council on American-Islamic Relations, Dawud Walid, said his group felt "extreme disappointment" but was working on resolving the situation with the help of non-Muslim allies.
"I will be picking up the phone tomorrow to some of our friends and allies to explain the situation to them," Mr Walid said on Sunday.
Source
Posted by Stacey at 11:53 AM No comments:

One man's accused of setting someone on fire

VANCOUVER (NEWS1130) - Police are linking two men from the Lower Mainland to an international organized hate group called 'Blood and Honour,' which is responsible for racially motivated attacks around the world.

The men are accused in crimes against four local victims.

After an horrific attack in February, Detective Constable Terry Wilson with the BC Hate Crime Team says 25-year-old Robertson de Chazal has now been charged with aggravated assault.

"[He allegedly set] a Filipino man on fire. The 25 year old victim fell asleep on a discarded couch near the intersection of Commercial Drive and 5th Avenue in Vancouver," he says. "Mr. de Chazal and two other men were observed by witnesses allegedly lighting the victim on fire. The suspects allegedly fled the scene before arrival. The victim sustained injuries to his arms, face, and neck."

A second man has been arrested in connection with this incident but hasn't yet been charged and therefore can't be identified.

de Chazal is also charged with assaulting a black man in September, 2009, knocking him unconscious

Meanwhile, 25-year-old Shawn MacDonald is accused in assaults dating back to 2008 on a black man, an hispanic man, and an aboriginal woman.

MacDonald and de Chazal have been released on conditions.

Showing off a table covered in flags and t-shirts covered in swastikas, Wilson says it's not illegal to be part of an organized hate group.

He says that motivation through membership can be used against an accused in court to label their offence a hate crime.

"If you belong to an organized hate group in BC we will know about you and if you commit crimes we will come and get you," warns Wilson.

None of the allegations against de Chazal or MacDonald have been proven in court.

Toronto's Dr. Abbee Corb is a global expert in white supremacy and radicalization. She says people should not be surprised these types of attacks happen in Canada.
While she says it's difficult for any expert to track down numbers, Corb points out these types of groups can be found across the country.

She says most hate crimes are committed by individuals with their own beliefs or who often have their beliefs fueled by groups posting material online.

"Hate crimes are very, very under-reported across Canada. People are afraid, at times, to reach out, because the hate crime doesn't just affect the person, it affects the community."

Corb says organized hate groups are very careful and know legal loopholes to make sure they get away with actions supporting their cause.

Meanwhile, Wilson says the local sect of 'Blood and Honour' is not connected to a white supremacist march that was planned but cancelled in Downtown Vancouver earlier this year.
He says there are up to 15 members of the group in this province that police are aware of.
There's another group in B.C. he says his team often investigates but is refusing to name it.
Posted by Stacey at 6:02 PM No comments:

Source
Posted by Stacey at 1:09 PM No comments:


"The love and lust over materialistic thing's made by people who are enslaved to work long day's just to be able to put a plate of food on the table and this doesn't include breakfast or lunch. A society of madness and the list goes on. People are driven to even trample and kill one another over fad's. What happen to the day's of kindness of allowing your fellow person of going first?....."
Posted by Stacey at 8:06 PM 2 comments:

Posted by Stacey at 4:08 PM No comments: 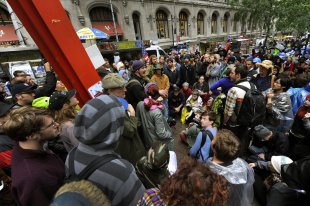 Toronto and other major cities are bracing for the Canadian echo of the Occupy Wall Street protest this weekend.
Thousands of people have been camped out in New York's financial district for a week, staging marches to protest the growing gap between America's super rich and the harried middle and working classes. Hundreds have been arrested.
The movement, sparked by an idea inVancouver-based Adbusters magazine last summer, has since spread to dozens of American cities and now is migrating north. Toronto, Vancouver, Montreal, Calgary, Regina and even sleepy Charlottetown are scheduled to see protests on Saturday.
Toronto will be the main focal point of the Canadian effort. Protesters are expected to converge at King and York Streets in the heart of Canada's finance and investment centre Saturday morning.
The group OccupyTO's website raises the spectre of a New York-style long-term action rather than a one-day protest.
"OccupyTO is a movement that will start on October 15th, 2011 that intends to show our solidarity with the Occupy Wall St. movement and stand in unity with the rest of the world to seek and work towards drastic changes to economic systems that are destroying our economy, social fiber, and environment," it says in a statement.
Toronto police have said little publicly other than they're prepared for the protest. The city and police service are still dealing with the fallout from the G20 summit protests, where hundreds were corralled and arrested after so-called Black Bloc militants trashed downtown businesses and police cruisers and some officers have been accused of assault.
The Toronto Sun reported "hard-core U.S. protesters" hoping to take part in the Toronto action will be stopped at the border.
"Our primary goal is that of public safety and facilitating a peaceful protest," Toronto police spokesman Mark Pugash told the Sun.
"Despite the organizers' best intentions, some are concerned anarchist protesters from the Black Bloc and other groups could co-opt the protest and turn it into yet another G20-style standoff between police and protesters," according to InsideToronto.com.
Protest supporter Thomas Zaugg told Inside Toronto organizers don't want to confront police.
"We have a peaceful message that's non-violent and in keeping with the message of Occupy Wall Street," he said.
An online petition is calling for police restraint.
"Perhaps, if the Occupy Toronto actions go well, the rift between Toronto and its police that opened as a result of the 2010 G20 meeting can begin to heal," the CBC reported.
The Occupy Toronto Market Exchange Facebook page stresses the protest's non-violent nature.
Vancouver, which has barely recovered from last spring's Stanley Cup riot, is likely to be the next biggest protest site this weekend.
The city's downtown art gallery, the traditional site of demonstrations, will be the main venue, the CBC reported. Activists have reportedly said they'll occupy the site for several weeks.
Organizers say they want to create a welcoming space to address the economic issues that sparked the movement.
"We are also committed to safeguarding our collective well-being — including safety from interpersonal violence and any potential police violence," the organizers said on their website.
Vancouver's Downtown Business Improvement Association has warned members to clear their display windows.
"This is not business as usual," spokesman Charles Gauthier told CTV News. "We don't expect anything to go wrong but unfortunately there could be a criminal element that could take advantage of this."
The Vancouver Police Department said it has talked to "self-identified organizers" and its planning for the weekend protest is continuing despite not knowing how many will show up.
"Legal protests and demonstrations in Vancouver are welcome, and people are free to gather in any public space as long as their actions are legal," said Const. Jana McGuinness.
In Calgary, protesters have already set up camp at St. Patrick's Island, near downtown. The city said it will assess the camp daily to ensure there are no health or safety concerns.
(AFP Photo)
Source
Posted by Stacey at 7:48 PM No comments:

My friend James Morris heads the World Food Programme, whose task it is to feed the hungry. He recently told me, "If I could have just 1 per cent of the money spent on global armaments, no one in this world would go to bed hungry." - Mohamed El Baradei, 2005 Nobel Peace Prize winner and former director general for the International Atomic Energy Agency